Several months ago, I happened to encounter giant driftwood with aggressively rough texture, which was the best wood I have ever seen. At first, I thought of using it in a 90P tank. However, it was beyond my ability to store a new 90P in my gallery at the moment, so I decided to purchase a 60P instead. Fortunately, I had my extra metal halide lump ready, so I could build an open-style aquarium although it was impossible to put such large driftwood in 60P tank. In this article, I will be reporting how I set up my aquascape, which may turn out to be a bit personal. However, how I solved the issues may be helpful when you are setting up a similar project. Enjoy!

And by the way, I have created my YouTube channel recently! Check it out for setup tutorials, gallery tours and so on!

I have spent months thinking about the layout. I mean it literally. I got this driftwood in September but started setting up the tank at the end of November. As many of you have already learned, there are 3 basic types of composition. This time I chose the convex composition, and here is the description from the ADA’s website; ‘The most difficult of the three basic compositions to achieve good balance. Balance between right and left open space is critical.’ Unconsciously, I have been avoiding this composition because I was not sure whether I was skilled enough for it. However, the shape and the size of the driftwood let me know the convex composition was the best choice. The concave composition was practically impossible to achieve because there wasn’t any space for another driftwood. The triangular composition seemed achievable, but I realised I needed a very thick layer of substrate in order to make the background plants visible behind the thick driftwood, and it would leave little space for fish to swim. Throughout this time, I learned that every layout material has its best composition.

So here are the general merits and demerits of cosmetic sand:

At last, I chose white cosmetic sand from ADA called ‘La Plata Sand’. There are two reasons for this. First of all, using sand in the foreground means I only needed soil for the background, so I could reduce the amount of soil I needed to purchase. Second, Sand is removable, so when I want to renovate the scape in the future, I can change it to the soil. Overall, white sand was a perfect choice for this scape. I love how I can see the shadow of the fish reflecting on the sand.

This process was far easier than deciding the layout because I had the idea in my mind. I always wanted to make an aquascape with only green plants, and this was a perfect time. I kind of chose aquatic plants off the top of my head but scraped together when I considered the balance of planting. Here are the plants I used in this scape; Philodendron sp. ‘Papua New Guinea’, Vallisneria spiralis, Vallisneria asiatica var biwaensis, Cyperus helferi, Echinodorus amazonicus, Eleochalis acicularis, Echinodorus tenellus var.broad leaf, Anubias baeteri var. nana ‘Petite’, Microsorum sp., vesicularia Dubyana.

As you can see, I mainly chose rosette plants. Though the shape is similar, they have a variety of colours and mixing them together makes a natural scenery.

I was quite busy with the daily water change in the first week since the beneficial bacteria was not ready for starting purification. After I made sure that the water is ready for welcoming fish, I added 20 cardinal tetras and 10 glowlight tetras. However, they hid immediately between the stones, which was unexpected. This was crucial because I was going to add some angelfish as the main character of this scape. I assumed that angelfish would chase the tetras and they would hide forever. Surprisingly, that was not the case. In. fact, by adding four angelfish to the tank, tetras began to come out and swim towards me when I feed them. I still can not find any explanation for this. Anyway, now the scape looks gorgeous!

The video of this aquascape is coming up real soon to my Youtube channel! 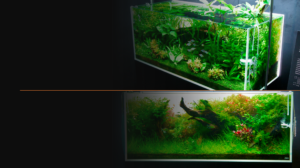 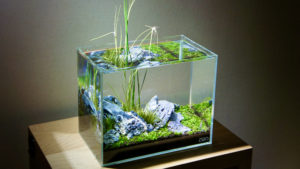 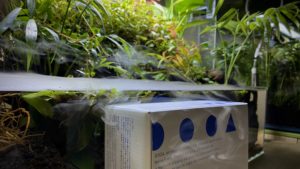 How to Create an Aquascape